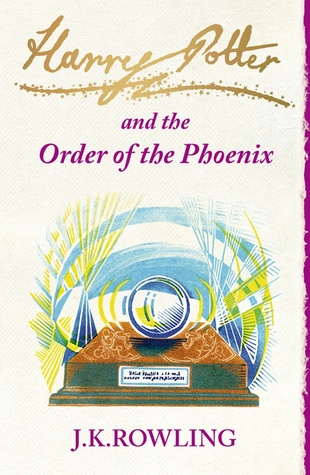 One-Sentence Summary: Ministry of Magic interferes with Hogwarts's administration and denies the truth of the return of Voldemort, forcing the students to rebel for freedom and the revelation for the truth.

On one of the hottest nights of the summer, Harry has an argument with his cousin Dudley on the street. Suddenly, both of them are attacked by the Dementors. Harry makes three attempts to cast the Patronus Charm to eliminate the Dementors. This leads to a surprise appearance of his old neighbour, Mrs Figg, who reveals herself as a Squib (a non-magical person born to at least one magical parent). Mrs Figg is angry with Mundungus Fletcher, who was supposed to be watching Harry under the order by Dumbledore but had Disapparated from the front of 4 Privet Drive just a while ago.

The incident causes Harry to face a hearing at the Ministry of Magic with a possible suspension from school due to performing magic at the Muggles world. Due to the Dementors' attack, nine wizards and witches arrive at Privet Drive to protect Harry to safely return to Hogwarts. They are the members of Order of the Phoenix, a secret society found by Dumbledore to fight against Voldemort.

Meanwhile, the Ministry of Magic denies the truth of the return of Voldemort. The Minister for Magic, Cornelius Fudge, wants to stamp his authority against Dumbledore by sending Professor Umbridge to Hogwarts as a teacher for Defence Against the Dark Arts. Professor Umbridge imposes strict discipline on the students and never allow them to learn any defence skills in her class. She inspects the teachers and scrutinises their lessons to ensure their teachings are up to the ministerial standard. Also, no one should be allowed to believe the return of Voldemort. As the interference from the Ministry of Magic and the restrictions on students are increasingly unacceptable in Hogwarts, Harry, Hermione, and Ron are planning to take the matter into their own hands.

It's getting on my nerves at this point, and I'm starting to despise the character, Harry Potter. He wants to know everything and is easily upset with others who know something he doesn't. But when he knows something, it's not that he knows how to deal with the matter by himself. He always gets help from others but not that he appreciates them. If others offer him protection, he feels they don't trust his ability to take care of himself. However, when a problem arises, he gets furious because he feels left out. And he rejects others' assistance because it's not the way he wants. I wish he could tell me what he really wants. Sometimes, I don't know who is angrier if I'm in his world throughout the book - me or Harry. After throwing tempers at everyone and being prone to outbursts of anger, finally, Professor McGonagall shoves him a life lesson - it's not about truth or lie. It's about keeping his head down and controlling his temper. Seriously. It's really annoying even I'm not his friend or someone around him.

I'm not a fan of Percy Weasley since the previous book. It exposes a lot of his ambitious and proud characteristics, which I guess most readers can foresee a downfall or expect a contradiction between him and his family just in a matter of time. Neville is the best friend that everyone wants to have but always get underappreciated. It is heart-wrenching to know about his misfortunate life. Besides that, he is also the subject of his classmates' laughter due to his poor academic performance.

This story is equivalently good as the previous book but, unfortunately, blemished by Harry's teenage angst. His anger issue has already started since the last book, and I was slightly annoyed with him as well. I'm not sure whose anger is more boiling up inside, him or me. The changes in this character are so drastic, and I really need time to adapt to this kind of attitude.

I really can't like Harry Potter after finishing the book. He is the most unlikeable character in this story, and I can't find a single thing from him that it's worth to be admired. When I reached the part where they were at the Forbidden Forest, I was really irked by his behaviour. He acts as if he is the only one that can save someone's life. I couldn't stand his arrogant tone asking Hermione to stay behind with the rest to attract more Thestrals so that only he and Ron could leave for London. Throughout the plan, he acts impulsively and rejects others with different ideas, even though his idea is not that wiser anyway. I wish I could be like other readers or his fans, more sympathetic with his troubled childhood, but I just can't. It doesn't give him the excuse of throwing tempers on everyone and demanding others to listen to him all the time but ignoring others. Is he going to act like that until the last book? Please tell me he will be more mature, and his attitude will be better as time goes by; otherwise, it is a struggle to enjoy such an intriguing story. I wonder his fans will be outraged with my critical opinions about Harry. They will tell me that he has the right to behave in such a manner because of his unhappy childhood, his parents and godfather's misfortune, and his being a teenager.

During the conversation between Harry and Dumbledore that occurs in Dumbledore's office, I suddenly hope that Harry will lose his life in any battles whatsoever so that no more innocent lives will get sacrificed for someone unworthy like him. Unfortunately, if Harry dies, it means Voldemort will take control. After a series of tragic events due to his impulsive behaviour, he doesn't seem to regret much. Instead, he tries to blame others, especially on someone he despises the most. I'm glad that Voldemort chooses Harry as his equal and not the other person. The other person has better characteristics, although everyone lacks confidence with his intelligence. It's not that Harry is smarter than the other person, but his lacking of intelligence is overshadowed by his connection with Voldemort.

The story is getting more complicated as it progresses with more new revelations, and the ending seems draggy. Probably I was affected by Harry's continuous shouting throughout the story. The ending makes him even worse with his stubbornness and unreasonable attitude towards everyone. Like he always said, nobody understands him, which also includes me. The entire story makes me feel tired if I have a friend or know someone like him. Nothing makes him happy whatever you say or do because he is always right, and he won't care about how you feel because only he has feelings. I feel bad for Ron and Hermione and admire their patience with him. What a shame because I really enjoyed the story and the depth of the new characters, but it's difficult not to shut my mind from Harry's intolerable attitudes from the beginning of the story until the end.

One-Sentence Summary: Voldemort wants to regain his power, but he needs to…