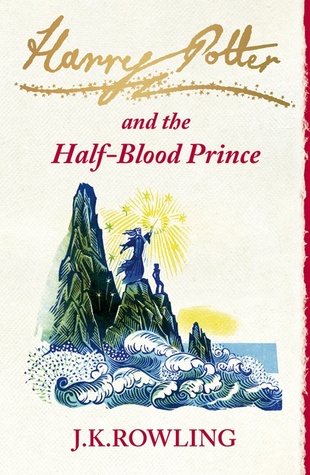 One-Sentence Summary: Teenagers' confusions of their love interests, Voldemort's history before going to the dark side, and Harry's obsession with Draco Malfoy's whereabouts.

I am glad that the story for once has a different beginning that does not involve Dursleys' mistreatment of Harry Potter. It has an uncommon start with the introduction about the Muggle Prime Minister and reveals the methods that the Ministry of Magic has implemented all these years in updating him about the wizarding world, primarily when a disastrous incident occurs. Scrimgeour has replaced Fudge for the Minister for Magic post, but Fudge is still working closely with the prime minister. The prime minister has a horrible week of a series of unexplainable disasters, and his government has to take the blame because he knows that no one will believe his story about Voldemort and Dead Eaters.

Meanwhile, Narcissa goes to Spinner's End to meet Severus Snape, closely followed by her sister Bellatrix. Bellatrix is unconvinced of Severus's loyalty to Voldemort, but Narcissa trusts Severus's ability to protect her son, Draco Malfoy, from the danger of a secret mission assigned by Voldemort. The secret plan is never revealed at this stage, but Narcissa believes that his son is punished by Lord Voldemort after her husband Lucius Malfoy failed in the prophecy recovery mission.

The news of the return of Voldemort causes anxiety to everyone in the wizarding world. No one dares to travel alone or after sunset. They increase their security and protection from Dementors or any harm from the dark side. Harry isn't expecting to return to Potions as his O.W.L. doesn't fulfil the requirement set by Professor Snape. However, since Horace Slughorn is the new teacher for Potion, Harry is now allowed to attend the class. An old Potion book is lent to him before getting his own one which he later finds out that the book belongs to someone who calls himself a "Half-Blood Prince".

This story is mainly about Tom Riddles's background or family history and the stages of his life before becoming Voldemort. So, there are three main things in this story. Teenagers' confusions of romance, Voldemort's past and Harry's obsession with Draco Malfoy. Perhaps I won't get bored easily if I read this at a younger age for teenagers' love interests. I still can't like Harry Potter, although the character's attitude seems slightly better than in the previous book. I almost believed he would be better, but it only lasted for the first six chapters. Actually, it's almost the same. Probably lesser angry but ruder than ever, such as questioning Dumbledore's whereabouts, doubting Snape's ability but overloaded with the self-confidence of his conspiracy theories without analytical thinking and convincing arguments. Of course, the story will lean towards Harry, showing what he suspects all this time is right.

Somehow, I found it hard to accept some of the details in the story or even like about it. For example, I don't agree with Dumbledore asking Harry to persuade Slughorn to accept the post and using Harry to retrieve Slughorn's memory. Another part that I'm not happy with is the main characters' friendships. Ron and Harry always support each other more than they are supportive to Hermione, although she helps them most of the time. Also, I felt there was something really wrong with Ron's view about romance and relationships. Most people will say that he is just a teenager looking for love, but the story portrays him as someone desperate for love with disturbing minds.

As I continued reading the book, the story seemed directionless and unsure where it would lead to. It wasn't as intriguing as the previous five books, and even the trip to the cave bored me. I thought Chamber of Secrets was boring, but this one is duller. There was always a message that the author wanted to pass to the readers in every book before this. As for this one, I really couldn't see further where the story would bring me. Up to this stage, I only realised that at least there were ups and downs throughout the Chamber of Secrets. In contrast, this one is more monotonous, focusing more on their love interests and the history of Voldemort. And also, don't forget Harry's obsession with Draco Malfoy.

One-Sentence Summary: Harry Potter is running away from Voldemort while searching for…

One-Sentence Summary: Ministry of Magic interferes with Hogwarts's administration and denies the…