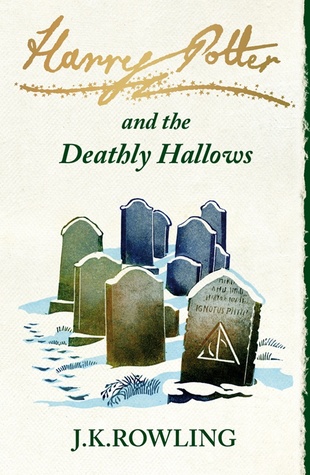 One-Sentence Summary: Harry Potter is running away from Voldemort while searching for Horcruxes simultaneously but is upset with Dumbledore's past and gets himself confused with Deathly Hallows.

Voldemort and his followers gather at Lucius Malfoy's manor. The Death Eaters provide their updates about Harry's latest whereabouts so that Voldemort can kill him. During this conversation, we get to know that Tonks, niece to Narcissa and Bellatrix, has married Remus Lupin. It is a humiliation for the sisters and others to laugh at the news of their niece marrying a werewolf. Bellatrix quickly defends themselves, denying that they still have connections with their niece.

Meanwhile, the Dursleys are forced to go into hiding under the protection of the Order of Phoenix due to their relationship with Harry. The last thing that Dudley says to Harry before he leaves is one of the first few memorable scenes from this book. When the members of Order of Phoenix are protecting Harry to a safer place, they are attacked by the Dead Eaters. It seems the Death Eaters have been expecting their movements on that night, leading the Order of Phoenix suspects one of its members must have leaked out their details to the dark side.

Voldemort and his followers have taken over the Ministry, the newspapers, and half the wizarding world. During the wedding celebration of Bill and Fleur, Kingsley Shacklebolt's Patronus informs the guests that the Ministry has fallen, the Minister for Magic is dead, and the Dead Eaters are coming. Harry, Ron, and Hermione flee from the scene and try to find a hiding place. At the same time, they have to work harder and faster to find the remaining Horcruxes before Voldemort finds out.

I'm not sure why Dumbledore's past is relevant to the story at this stage. This is similar to the previous book, which introduced a textbook scribbled by the half-blood prince. I couldn't find the purpose of having a story about a scribbled textbook in such a dire situation. The scribbled textbook is not part of the Horcrux, and in the end, we get to know the half-blood prince's life through the Pensieve in this book. This even confuses me and questions why the sixth book exists. As for this seventh book, I don't see how Dumbledore's history relates to the Horcrux or the Deathly Hallows. Most of the seven Horcruxes are related to Tom Riddle's past, and the Deathly Hallows relates to a story of three brothers.

Another thing that annoyed me is Hermione's repetitive dialogues about Harry is not blocking Voldemort's mind. What is the reason to portray her as a nagging person? I know that she is stubborn to rules, and most of us already knew about it after reading six books. I don't see why there is a need to keep stressing about her personality to the extent of pushing readers to hate her. I always thought that Ron should be the one who doesn't understand that dreams can't be controlled since he is a pure-blood, and Hermione is a Muggle-born who is more logical than Ron.

However, I would like to highlight a few key moments that I found from this book. I think the idea of seven Porters is brilliant and a bit humour at such a dark time. Although I'm not a fan of Harry Potter, I admire his selfless acts in risking his life to rescue the Muggle-born from the court. Other unforgettable moments for me from this book include Dobby's fate after rescuing Harry and other hostages, Neville's courage to fight against Voldemort, and what he does to one of the Horcruxes. And my favourite object is Hermione's beaded handbag, where you can bring any objects without feeling the weight. Apart from those pivotal moments, nothing can beat the time when Harry views Snape's memories through the Pensieve. Although unconvinced with the flow of the story, I felt that is the best part of this book, and I'm willing myself to take the bait. I felt that the purpose of Harry to have Snape's memories is to explain Snape's sacrifices and to do him justice. The Pensieve leads us to feel heartbroken with Snape's life, the misunderstanding of others, the truth that he can't reveal to anyone, and his long time pain after losing his loved one. He has his shortcomings, but his misdeeds are overridden by his sacrifices and loyalty. When looking into his life, I felt Lily Potter is a very loveable person, and I understand why Snape is faithful to her. She never looks at him differently due to his oddity, but unfortunately, the only thing that forces them to split paths is his choice to the dark side. Maybe some people will still hate Snape because of how he treats Harry, but t I have to admit that I really admire his faithfulness to love. He has to risk his own life to protect the son of his bully and also the son of his lover who has chosen someone else. It sounds cliché, but I'm willing to take it. At least there is something for me to feel moved in this story?

I felt the entire story was mediocre, and the series was not what I expected. I'm not sure whether I put too much hope in it due to its fame or the story was going well until the fifth book. I really find it hard to love any of the main characters. I probably liked a few characters such as Professor McGonagall, Neville Longbottom, and Luna Lovegood. Hermione is probably the most tolerable character among the three. Despite her stubbornness and a conformist, but I really admired her intelligence. I understand why many people loved Harry Potter when the book was just released during the late '90s. I respect those who still love the story after so many years. When Harry Potter was introduced to the world, no other authors came out with such a unique and refreshing idea about the wizarding world. It was a different and unusual experience for the readers. However, I really can't accept Harry Potter is the best book of all time. It's more acceptable if it is one of the most influential children books of all time, but not the greatest books for me. I guess it's best for other readers because of the various characters' personalities, the wizarding world, the magical effects, the love and friendships, and a place to fantasize when reading the books at a younger age.

As an adult reading this book, I found many loopholes because coincidences were everywhere. There weren't any details to explain how it happened, and many other irrelevant details kept appearing, which confused me more. I don't understand how a trip to find a Horcrux attracts many people to gather in Hogwarts and suddenly turns into a battle. Maybe the appearance of Harry gives hope to the people during the rough time. That's what I can think of. Then, a ruthless Voldemort purposely gives one hour to Harry to run to Dumbledore's office so he can look into Snape's memories. After fighting for a long time, it doesn't make sense that he gives them time to tend the wounded and take a break from the battle. As the story comes to an end, it gets more complicated with the explanations about the Horcruxes and the Deathly Hallows. I felt the author seems entangled with her continuously adding new details and struggling to end the story more straightforwardly. It feels like the author was striving to give reasons to every introduced plot and scrambling something to release herself from the entanglement. I wish the author puts a full stop to the story at Hogwarts. The cheesy epilogue turns into a romance novel style of ending has created more damage to the story. I was dumbfounded when the son was named after Snape and Dumbledore. I'm not sure whether naming after them is the issue or combining their names is the one that horrified me. Why do the main characters have to get married? Although I don't have any opinions about their partners, I don't understand why Ginny has to be with Harry? In fact, Harry's friendships with any other girls such as Hermione, Luna or even Angelina Johnson are stronger than his friendship with Ginny. It's not necessary to be Luna or Hermione, but how the arrangement for Harry and Ginny seems forceful to me. At least Ron and Hermione have a solid foundation of friendship, although their compatibility is a different subject and irrelevant to be discussed here.

My personal rating for the books in this series (Best to Worst):

The Goldfinch by Donna Tartt

One-Sentence Summary: A life journey of an art thief after the loss…