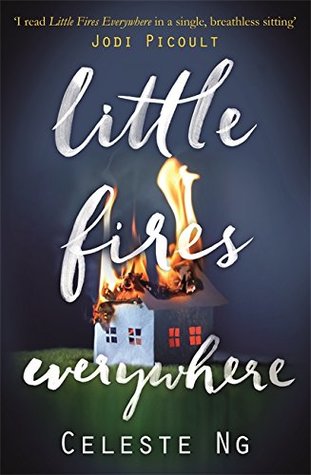 One-Sentence Summary: A wealthy family living in a rule-bound community is curious and obsessed with a struggling family who lives a freestyle life.

Shaker Heights appears to be a happy place to live. It seems filled with lovely community and various facilities, including golf, riding, tennis and boating. That summer, the gossip is all about Isabelle, the last of the Richardson children who had burnt the house down, shifting from the news of an American Chinese baby adopted by a white family.

Isabelle or Izzy is the black sheep in the family. The three other Richardson children, Lexie, Moody and Trip, have no doubt that Izzy is the one who sets the fire. Meanwhile, Richardson's tenant, Mia and Pearl, had left their rented house the night before the fire.

Residents in Shaker Heights need to follow a set of rules to preserve the views of the street. Every house on Winslow Road lives two families, but outside appeared to hold only one. This is to avoid the stigma of renting a duplex house, and neighbourhoods with rentals were less desirable. Garbage will be collected by a man in a large motor scooter, and no grass can be over six inches tall. Each style of house is assigned with specific colours and only allowed to be painted in those colours. Everything has been planned well in Shaker Heights since 1912.

The story turns back to the time when Mia and her daughter Pearl moved into the rented house on Winslow Road. Mia is a struggling artist. She takes odd jobs, and they move from town to town every time she finishes one project. One town, one project and then they will move on to the next. Mia promised her daughter they would settle down at Shaker Heights this time.

Both Pearl and Moody become close friends. Moody is fascinated with Pearl's life and so do Pearl with the Richardsons. Moody's sister Lexie is becoming good friends with Pearl, and Pearl is slowly changing to be more sociable and confident after spending more time with Lexie. Meanwhile, the youngest of Richardson's children, Izzy, is fascinated by Mia's understanding of her which she never experienced before from others. In short, both families are curious about each other's life which is different from theirs. The Richardsons are wealthy and live in a rule-bound community, whereas the Warrens are poor and have a more free lifestyle.

Linda McCullough is Mrs Richardson's old friend. She and her husband has recently adopted a Chinese American baby after the baby girl was abandoned at the fire station. Lexie shares the story with Mia, and Mia feels uncomfortable after hearing it. Mia believes that the baby girl belongs to her workmate Bebe who works in the Chinese restaurant. She feels Bebe has the right to claim back her child and decides to tell Bebe about it.

Thus, the adoption news leads to the fight between Mrs Richardson for her friend's happiness and Mia for her workmate's justice. It's also a battle between a married couple struggling to conceive a child all this time and an abandoned single mother who made a mistake and wants to get her baby back.

I thought Elena would be an ordinary American woman with a job and children with a boring rule-bound life that she is proud of. I couldn't believe she lost herself when she sided with her friend and was keener to investigate Mia because of her loyalty. I guess it all started when Mia rejected her kindness, and she felt offended about it. Elena is very eager to help whoever she feels needs to be helped, and she will get upset or can't understand why others will reject her kindness.

Shaker Heights seems like a hypocrite place to me. The residents seem to act charitable and try to be inclusive, or maybe that's what Elena thought about the residents in Shaker Heights. All those are not really coming from their hearts. They are just following the rules passing from generations to maintain their perfect images and reputations. I wonder if Elena has so much rage on Mia, not because of Linda. It's probably her jealousy towards Mia's freedom because she can't be set free from her rules and accept someone who lives differently from her. She keeps justifying her beliefs and all those rules in Shaker Heights and can't comprehend Mia's life or probably anyone's life outside her cocoon. The funniest part for me is that while Elena keeps herself busy investigating Mia's past, her children are getting closer to Mia and Pearl.

I guess the Richardsons are obsessed with someone different than them or probably anyone who is not living in Shaker Heights. Deep down, they want a certain level of freedom instead of binding to the principles and rules. At least a choice of making decisions.

I liked how Elena is portrayed as a privileged white woman who can't see other perspectives other than her own race. I almost choked when she suggested that "everyone at birth should be given to a family of another race to be raised to solve racism". Whoa. And she believes raising a Chinese child is just like raising any other child, and it shouldn't be any differences. I wonder whether she will have the same opinion if a Chinese or a non-white couple adopts a white child. Will she still stick to her view?

Master of My Fate by Sienna Brown