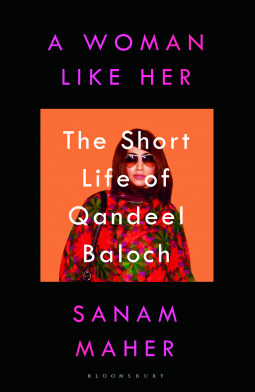 Pakistan's famous social media celebrity Qandeel Baloch has posted many videos and photos of herself on social media. She is also known as 'Pakistan's Kim Kardashian'. Thousands watched her posts, although the contents became more risque by her country's standards. In July 2016, she was killed when she was twenty-six years old by her brother for his family's honour.

Adil Nizami, a reporter for 24 News, recalled the day he received the news about Qandeel's murder and rushed to the Muzaffarabad police station. The first time he knew of Qandeel's existence was in March 2016. He was shown a video of Qandeel promising to do a strip dance if the Pakistan cricket team defeats India in a T20 match. At 11.25 am on 16 July 2016, Adil Nizami broke the biggest story of his career when he was just a twenty-five-old rookie reporter. 'Famous model Qandeel Baloch has been killed.' He reported the news directly outside of Qandeel's house.

Then, the story brings us to where Qandeel was born, the village of Shah Sadar Din. Journalists around the world travelled to Multan in the days after the murder. Qandeel was supposed to end up in the river, like the village's tradition - putting any girls they killed in a gunny sack and stuffed with stones before dumping the sack into the river. Due to their neighbour's mourners gathering outside the house that day, her younger brother Waseem, the killer, has no chance to smuggle the body out of the house.

When reading the interview with Qandeel's parents, I'm not sure how much of what they said is the truth, judging by the fact that they had changed their stories several times after that. Besides, their lawyer, Shah, kept answering questions on their behalf, which seemed more like enjoying the ride of fame.

Qandeel's independence began after she fled her abusive husband from a forced marriage and left her child to start a new life. She wanted to have her own life and entered showbiz to become a star.

This book also touches on how fame works in Pakistan. There were interviews involving models, agents and managers, and even someone who suddenly became famous due to his look, such as Arshad Khan. He was a chaiwala at a bazaar but reached a high peak of fame after his photo randomly took by a photographer and posted on social media.

Qandeel is not a typical social media celebrity. She posted videos online about random things in her daily life. Earlier in her career, she was rejected in Pakistan Idol. She liked to sing, but unfortunately, she didn't have an outstanding singing talent. Most people were obsessed with her videos because it's something that they could laugh at or probably mock. It's divisive; some loved her, but some threw abusive comments at her. What really amazed me was that she didn't care about those rejections and negative feedback about her. She seemed like a simple girl who was more interested in earning an identity or existence than in money. She also sounded playful but lonely, leading her to always look for something to do to ease her boredom, but she didn't sound like someone who sought attention. She is more like seeking or yearning for freedom. I felt that is unfortunate for her to be born in the wrong country because she had so many things that she wished to do, but what she wanted was not permissible or contradicted the religious and cultural norms.

This is great coverage of the real life of Qandeel Baloch and an opportunity for us to look into her personal life behind the screens. She has no reason to have such an ending, even if it contradicts the religious and cultural ethos. She didn't deserve such treatment, and no one should have a such ending.

It's appalling with the dominance of the patriarchal society, which only prioritises men's egoism and eagerness to be honoured by others. They are always worried and can't bear what others might think or say about them. It's because they can't control people's mouths, but easier to control women; they choose the latter option. I feel it is sickening more than honourable. I guess those men are always over the moon when earning respect from their community and maybe a certain number of people in the country, but they have no idea that the entire world is disgusted at them.

Is honour more valuable than a human's life? Is nothing else in their lives more important than being respectable? I don't understand how anyone or a community can highly-praised a murderer who just killed his own family member? I'm so dumbfounded by the existence of honour killing and the law of forgiving the killer, which allows the killer to walk free. The worst part is that some women agree with such an act. How could they do that? Just because she's being herself and wanting to be free and doing something different than the cultural norms, it doesn't give the right to anyone to judge and, worse, to kill. The ironic part is Qandeel's brother stole her possessions after he killed her. So, stealing is more acceptable than posting videos online? Isn't what she possessed bought from the money she earned from what he felt was a "dishonour" to the family? Isn't what she owned "unclean" by his moral standard, then why steal her belongings?

If anyone talks about God, doesn't only Himself have the right to judge and take someone's life? Not us, not any humans.

The Unforgiven: Missionaries or Mercenaries?