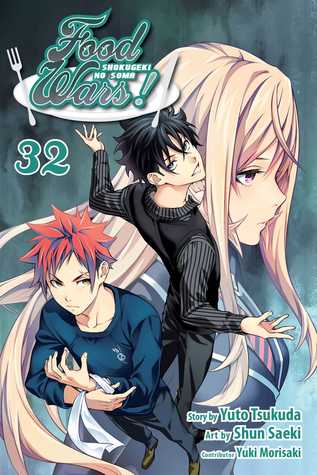 The previous volume (Food Wars Vol. 31) has revealed the identity for one of the chefs who involve in the noir invasion. Soma is shocked when he learns from his father that he has another brother.

Meanwhile, in the Totsuki Academy, a new lecturer has arrived. His name is Suzuki, and he seems friendly to his students. Once he meets Soma, he challenges Soma for a shokugeki. Suzuki's intention for the challenge is to reach the highest level so that he can win Erina's heart to be his wife.

Soma suspects Suzuki's identity as a lecturer. He wants to know Suzuki's secrets if he wins the duel. But if Suzuki wins the battle, he wants to have Soma's knife. Both Soma and Suzuki cook the same dish, which is a loin katsu with the difference of the sauce. However, Suzuki brings a different dimension of deliciousness with the existence of both lightness of the loin katsu and the weighty sauce.

Chef Doujima has some news about Saiba for Soma. He tells Erina that Saiba and Jouichiro (Soma's father) knew each other in America ten years ago. Jouichiro treats Saiba as a disciple, and Saiba's ambition is to defeat Soma, the first seat of the Elite Ten.

The end of term exam for 2nd-year students takes place at a beach. The students need to operate a seaside shop to reach the sales target, and the Elite Ten needs to rebuild the damaged shop before they can start to run their business.

On the first night, Erina is kidnapped by Suzuki back to the noir's hideout. He will be participating in a battle called 'BLUE'. The purpose of the tournament is to decide among the young chefs who will lead the coming generations. He wants Erina to participate in the battle, but if he wins, Erina has to become his wife.

To be honest, I have no idea what I'm reading. Probably it has been quite some time since I read the previous volume. The story seems derailed from the usual style. I still wish it ended after they become the new Elite Ten.